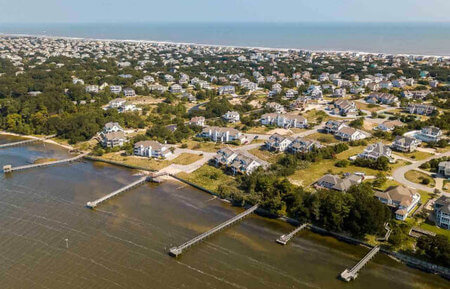 It’s been a mixed month for the Outer Banks property market, with major gains in some sectors and significant slumps in others. Starting with residential properties, there was more evidence to support the increasing value of properties on the Outer Banks as the average price of single-family detached residential units grew by 4% year on year. There was also an impressive increase in the number of units sold, with September’s total hitting 1275, 13% higher than the 1130 achieved in the same period of 2016. However, the average price of residential lots sold for development on the Outer Banks did not conform to the same pattern. Instead, the average dropped significantly, falling by 19% from last year. The number of lots sold climbed slightly, up 3% from 344 to 353. This is unsurprising, as the number of building permits issued fell for another month. Of the construction permits awarded to developers on the Outer Banks, the biggest number (43) were awarded for work in Kill Devil Hills, as the town continues to lead the way in new development. The average price of condominiums sold also fell, although only slightly, to 1% below last year’s September average. Sixteen more condominium units were sold this September, however, representing a 12% increase as the total reached 151. The market performance from both single-family detached properties and condominiums shows that these two property categories remain the in-demand classes on the Outer Banks. All in all, it was a strong month for residential properties. The average price per unit of the properties sold was up by 4% on last year, while the 1484 sales represented an 11% increase on last year. In the commercial sector, it was a different story. Commercial property values took a major tumble, dropping 30% in the same period of 2016. Despite the reduction in cost for buyers, only 16 units were sold, 24% less than the 21 units sold last September. The slump in commercial property prices means that the average selling price for commercial and residential properties in Outer Banks experienced a net increase of 0%. Even as growth in the residential sector was cancelled out by the commercial sector, the market continues to look healthy; the total number of properties sold in the region climbed from 1734 to 1900 year on year, and the number of short sales and bank owned properties decreased for yet another month – by 17% and 1% respectively. In September, distressed properties like these accounted for only 9% of residential sales. This is reflected in the time the average property stays on the market. In September 2017, the average marketing period is 124 days; down from 203 last year. In terms of inventory, unit numbers were down across the board, with the commercial sector taking the biggest hit. Commercial inventory fell by 22%, lots and land by 13%, and residential by 10%. All data provided by Outer Banks Association of REALTORS® Multiple Listing Service – or OBAR.
Categories
LATEST BLOG POSTS